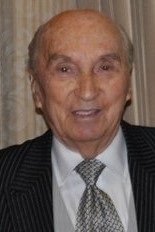 Please share a memory of Mykola to include in a keepsake book for family and friends.
View Tribute Book
Mykola Mychalczak, 98, of Manlius, NY, passed away peacefully with family at his bedside from complications related to pneumonia on Saturday, May 18, 2019. Mykola, son of Anna and Wasyl, was born on December 12, 1920 in Balyhorod, Ukraine. He completed his secondary education at the local Gymnasium and attended business school in Poland in preparation to help run the family meat and produce business until his studies were interrupted by World War II. At the young age of 18, he left his beloved home with his younger brother Stephan, not realizing at the time he would never return. While living abroad after the war he developed a passion for classical music and opera. He was an avid reader and enjoyed learning about history. He immigrated to the United States with his brother in 1949. After briefly living in the Philadelphia area, he settled in Detroit, Michigan, where he met the love of his life, Marika Zarewych. The two were wed on May 19, 1956 at Immaculate Conception Ukrainian Catholic Church in Hamtramck, Michigan. Throughout his life he focused on his family and was active in the Ukrainian community. He enjoyed singing in the choir at the St. Josaphat Ukrainian Catholic Church in Warren, Michigan and was a member of the Trembita Men's Chorus in Detroit where he toured and performed many concerts over the years. He retired from the Great Lakes Meat Packing Co. in Detroit, in 1983, where he was a supervisor. Mykola was first and foremost a dedicated and devoted husband, father and grandfather. He was deeply religious, had a love for his homeland and Ukrainian heritage, and a love for his adopted country, all of which he instilled in his children and grandchildren. He delighted in sharing in the accomplishments of his children and seven grandchildren and, age notwithstanding, eagerly attended his grandchildren's activities and family events. In 2003, he relocated to the Syracuse area to be closer to his children where he continued to have an active life in the local community. He was a communicant of St. John the Baptist Ukrainian Catholic Church in Syracuse. Mykola will always be remembered as a kind and true gentleman with a generous spirit. He had a zest for life and was loved by many. His beautiful life will forever be cherished in the lives of his family. He is survived by his loving and devoted wife of 63 years Marika; daughter Marta and son-in-law Andriy Kowalsky of Toronto, Canada; son Dr. Borys Mychalczak of New York City; daughter Roma and son-in-law Dr. George Temnycky of Manlius, NY; and seven grandchildren, Andrea, Mark, Alexa, Ivanka, Adrian, Sofia and Nicolas. Calling hours will be held Thursday, May 23, 4:00-7:00 PM at Macko-Vassallo Funeral Home at 1609 W. Genesee St., Syracuse, NY. The Panakhyda Services will be held at Thursday, May 23, 7:00 PM at the funeral home. Funeral services will be conducted Friday, May 24, at 10:00 AM at St. John the Baptist Ukrainian Catholic Church, 207 Tompkins St., Syracuse, NY. Mykola Mychalczak will be laid to rest in St. John the Baptist Ukrainian Catholic Cemetery. In lieu of flowers, the family requests that donations be made to St. John the Baptist Ukrainian Catholic Church, Dome and Cupola Fund, 207 Tompkins St., Syracuse, NY, 13204.
To send flowers to the family or plant a tree in memory of Mykola Mychalczak, please visit Tribute Store
Thursday
23
May

Share Your Memory of
Mykola
Upload Your Memory View All Memories
Be the first to upload a memory!
Share A Memory
Send Flowers
Plant a Tree