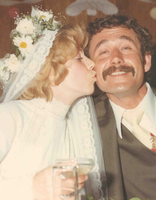 Walter J. Hrynyk 10/4/1946-4/20/2021 Walter was born in Ludwigsburg, Germany On October 4, 1946. In 1950 his family immigrated to the U.S and settled in Syracuse, NY where he resided the rest of his life. Walt was the first born son to Paul & Anna Hrynyk. He is survived by his wife Cathy Cain Hrynyk, his 2 children Erin E. Campbell & Paul M. Hrynyk. 2 grandchildren Renee & Braiden, his twin brothers John (Sue) & Raymond (Sue) Hrynyk, and numerous aunts, uncles & cousins. Walt & Cathy were married in June of 1976 in the St. John the Baptist Ukrainian Catholic Church. Their wedding song was "Time in a Bottle" by Jim Croce. Their honeymoon followed with a (1) month cross country road trip across the U.S.. In our younger years when we were hippies we attended Woodstock in 1969 and Strawberry Fields 1970. From 1960-1961 Walt attended St. Basil's Preparatory School then later graduated from Central Tech High School in 1964. Following his graduation from Central Tech he attended CCBI business school in 1965. He then enlisted in the US Army and served in the Vietnam War from 1966-1968. Returning home from Vietnam Walt joined the painter's union and had a career as a painter for over 40 years retiring in 2010 from the Syracuse City School District. During these years he was very involved in union politics and held several positions on the Board of Electives, including President of Local 31 where he was re-elected several times. Walt had many hobbies & talents, he was an avid fisherman & hunter, he also enjoyed the challenge of black powder guns & archery. In retirement he became a self taught Antiquarian having a successful antique business for many years. Walt had a very Charismatic personality, he was the life of the party and he was a true renaissance man. He was loved by all and he will be dearly missed by all. The family looks forward to celebrating his life in the near future. Please check the funeral home website for future details. "Danced Me to the End of Love" By: Leonard Cohen