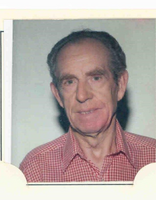 Emil Yaney, 95, of Syracuse, passed away saturday December 12th 2020 at Iroquois Nursing Home. Emil was born in Ukraine and has lived in Syracuse for over 61 years. He retired from the Stanton Foundry Co. where he worked as a Core Maker for many years. He was a communicant of St. John the Baptist Ukrainian Catholic Church, the Ukrainian National Home and the Organization for the Defense of the Four Freedoms of Ukraine. He was predeceased by his wife Kataryna who died in 1995. He is survived by his daughter Donna Yaney of North Syracuse and relatives in Ukraine. Funeral services will be held Saturday 9:30 AM from the Macko-Vassallo Funeral Home and 10:00 AM at the St. John the Baptist Ukrainian Catholic Cemetery Chapel. Emil will be laid to rest in the St. John the Baptist Ukrainian Catholic Cemetery. A calling hour will be held Friday December 18th from 4-5 PM at the funeral home, 1609 W. Genesee Street. The Panakhyda Service will be held at 5:00 PM at the funeral home.