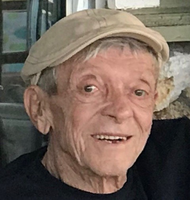 Donald L. Ellithorpe, 81, of Florahome, FL; Liverpool, NY and a summer resident of Brennan Beach, Pulaski, NY passed away peacefully in the early morning hours of April 2, 2019 with his family by his side. He was born in Syracuse on December 3, 1937 to the late Leonard & Virginia (Lucas) Ellithorpe. He was also predeceased by a son Daniel Ellithorpe who died in 2016 and a granddaughter Jacqueline Stilwell who died in 1990. Don was a US Air Force Veteran where he served as a Staff Sargeant and was a firefighter while stationed in Germany. Don retired from the Syracuse Fire Department where he worked at Hancock Airport as a firefighter. He loved the outdoors and was an avid hunter and fisherman. He enjoyed walking the beach and collecting sea glass from the shores of Brennan Beach where he and his wife Shirley camped for over 30 years. He is survived by his Wife of 46 years Shirley (Michel) Ellithorpe, his children Richard & Terry Barbato, Darlene Barbato & Chuck Henry, Michael & Bettie Ellithorpe, David & Alexandra Ellithorpe, Michael Barbato & Deborah Vandusen. Several grandchildren and nieces & nephews. A celebration of his life will be held on August 18, 2019 at 3:00PM at the Brennan Beach RV Resort, 80 Brennan Beach Road, Pulaski, NY. In the recreation hall. A luncheon will follow after the services. You may express your condolences by signing our guest book at www.mackovassallofuneralhome.com