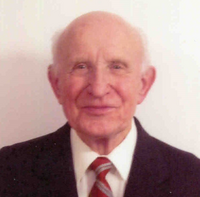 Thomas Bocon April 29, 2022 Thomas Bocon, 100, a long time resident of Syracuse, passed away on Friday April 29, 2022. He was born to Omelan and Antonia Smarsh Bocon in the Village of Malastiv, Ukraine, the oldest of 11 children. Like many Ukrainians fleeing the Red Armies during WW II, he made his way to West Germany. After overcoming some exciting and difficult experiences, he ended up with his wife and infant daughter in the displaced persons camp at Berchtesgarden. In 1949, sponsored by relatives, he and his family immigrated to Auburn, NY. After trying to work at 5 different jobs, Thomas decided to attend and graduated from Auburn Community College in 1953. He went on to graduate from Syracuse University with a Bachelor's in Chemical Engineering in 1958. After graduation, Thomas worked for Republic Steel Research Center in Cleveland, Ohio until he was offered a position teaching Advanced Chemistry at Central Tech in Syracuse. He preferred working with bright young people rather than a monotonous job in research. During summer months he attended RPI where he earned a Master of Science Degree. In the succeeding years, Thomas taught at other schools in the Syracuse City School District and retired from Fowler High School in 1984. Thomas was a communicant of St. John the Baptist Ukrainian Catholic Church, a member of the church choir and the Holy Name Society. He was active in the Ukrainian community; The Ukrainian National Home, Ukrainian Federal Credit Union (formerly Self Reliance), a member of the SURMA Male Chorus, and the Ukrainian Congress Committee. He helped many immigrants to obtain necessary documentation required for US citizenship. Thomas was an avid skier and he enjoyed traveling throughout the USA and several European countries and mostly his native Ukraine. The most memorable pilgrimages he made were to Rome, Italy for the celebration of the millennium of Ukrainian Christianity and to the Holy Land where he followed the footsteps of Jesus. He was predeceased by his first wife Helen, 2-sisters and 4 brothers in Ukraine. He is survived by his wife Margaret (Bartosch) Bocon, his daughter Oksana Fanok, Adopted son Joachim (Patricia) Bocon, grandson Nicholas Adam Fanok, granddaughter Melania Fanok (Jason Pitts) , sister in law Mary (John) Bocon and a brother Andrij, and sisters, Julia, Stefania and Irena all of Ukraine. Calling hours will be held on Thursday, May 5, 2022 from 5:00 PM to 7:00 PM at the Macko-Vassallo Funeral Home, 1609 W. Genesee St. Syracuse. The Panakhyda Service will be held at 7:00 PM at the funeral home. Funeral services will be held on Friday, May 6, 2022 at 10:00 AM in the St. John the Baptist Ukrainian Catholic Church, 207 Tompkins St. Syracuse. Thomas will be laid to rest next to his first wife Helen at the Holy Spirit Ukrainian Catholic Cemetery in Hamptonburgh, NY. In lieu of flowers, contributions may be made to the UKRAINIAN CATHOLIC EDUCATION FOUNDATION, 2247 W. Chicago Ave, Chicago, IL 60622